Jan Lesák
— The Case for a Rookie

So that everything fits and the plot has momentum…

(A commentary on, Case for a Rookie, a work by Jan Lesák)

Although I would prefer not to stir the current melting pot of existing opinions that are trying to overcome modernism, I should like to mention the following association. I cannot help but link the idea behind Jan Lesák’s work Case for a Rookie, based on a transcript of Pavel Juráček’s film Case for a Rookie Hangman, with the slightly more dated thoughts of Petra Herotová and her sculpture called Spinning (2007), which she created by stacking ‘identical’ drawings on top of each other with a view of them being used in animation.

That, which during the time of the tense individualistic conquest of unknown territories and forms would have created discomfort and appeared immoral, today represents a desired moment of connectivity within a broad range of opinions. Although the two works are similar in form, individual aspects of the works are in divergence. Firstly, both works aim to create a cohesive whole through bringing together the mediums of film and sculpture (in the case of Lesák, objects); however, Lesák’s Case is based on a film while Herotová’s Spinning is aimed at animation. The thousandfold repetition of the same drawing (its nuances being important in creating animated movement) and the layering of the individual drawings one on top of the other allow for the creation of a sculpture. Conversely, Jan Lesák emphasizes fluidity. The text flows continuously from page to page in a regulated A4 format landscape. The photographical presentation of a film within an object (photo documentation of a part of the text from one film segment, mechanically delimited through the relationship between the typed line and an A4 format sheet) is that one specific moment that freezes the flow. This illustrative presentation of inner content makes time stand still, and, with the addition of a red bookmark, makes the photo a motionless object with its own time and space.

There are several theoretical propositions that may be used to interpret this fairly uncomplicated work by Lesák, including Walter Benjamin’s postulate about the loss of aura in an artistic object, the premise of relational aesthetics and postproduction put forth by Jean Bourriaud, and even the practice of ‘re-enactment’ and psychoanalysis. It brings together two seemingly contradictory methods – the empathic and the mechanical. Maybe it is this specific combination that allows this work to capture some of the Kafkaesque absurdity present in Pavel Juráček’s films, even if only for a fraction of a second. Specifically, this includes 1) the mechanical process used to transcribe the spoken word; 2) the pragmatic senselessness of this activity; 3) the way the work’s physical form is determined by the material and equipment that are used (A4 format paper and a typewriter); and 4) the placement of the film content precisely in the centre of the page format is in strained contrast to experiencing the film through reading the written word, thus emphasizing the active and creative nature of perception and the immortality of the work through infinite avenues of interpretation.

Regardless of how distant the author’s chosen form is from the original, surrealist flashes of the film break through the sterile, empty-office, minimalist and conceptual aesthetics. Maybe it is also because of the invisible traces left by the author’s almost month-long mental sojourn with the scribe within him. The new work challenges the original film (1969), and, even if the viewer is not familiar with the original, after reading only the few lines presented in Lesák’s work, he/she quickly becomes infected with its associative imagination. The aforementioned mechanical process is actually an initial sign of insanity (the artist is reminiscent of the character of Jack Torrance in The Shining, or rather the endless pages of manuscript he types up containing only one sentence written over and over) as well as the insurmountable absurdity leading to it.

The projection of the film is the last component of the whole installation – it is like a wall painting which, as it were, only echoes the physical shape of the work (the pile of papers), split in half by the black and white content. And so now to end this commentary on Lesák’s work in the air of unoriginality, I should like to quote the last line of a thesis appraisal by Jiří Kovanda, ‘What does the black line (note by E.J.: surface) that cuts through the white block mean? Mercilessly, right through the centre…’ 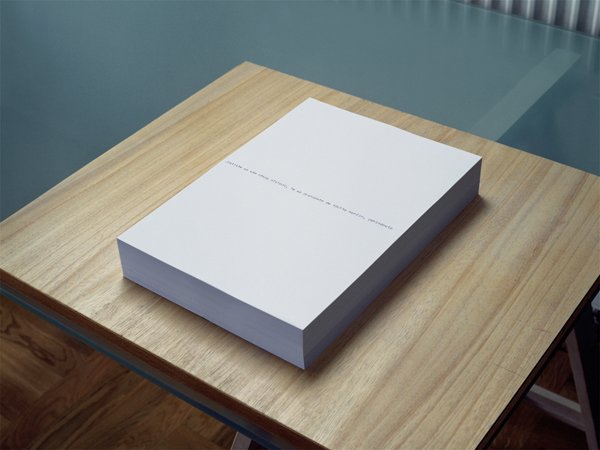 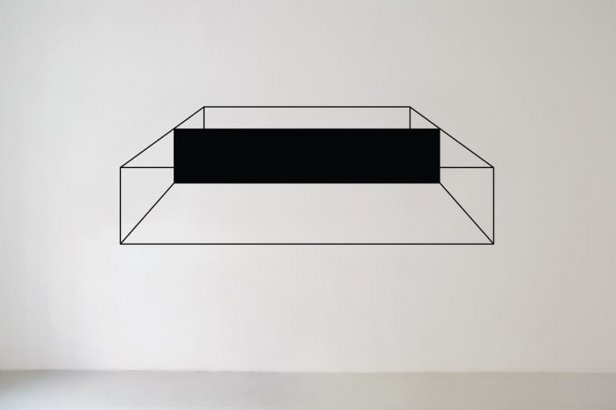 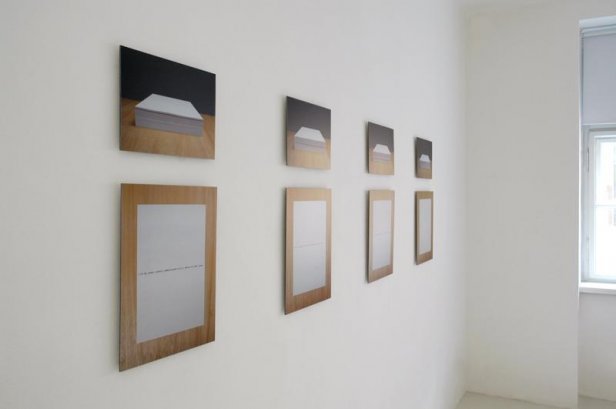 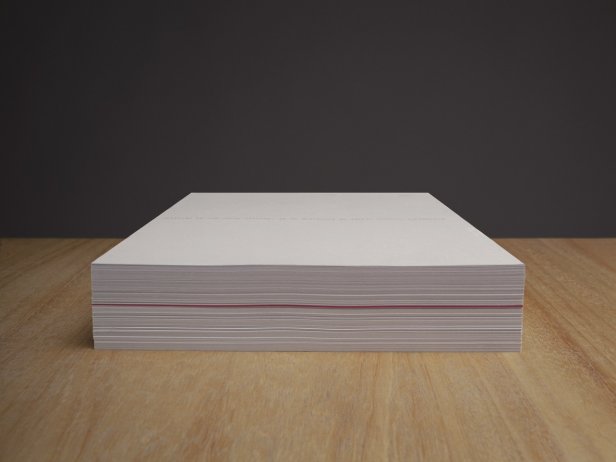 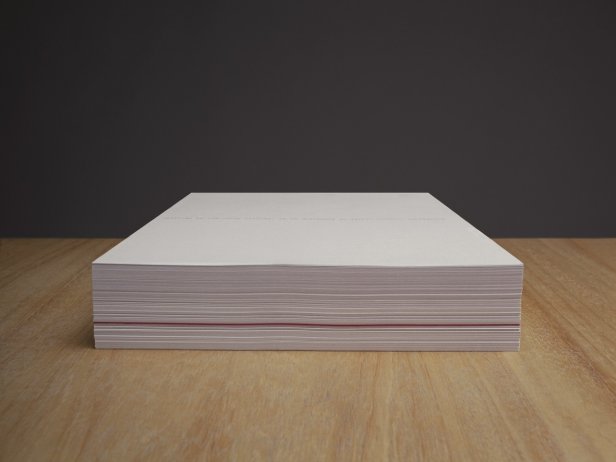 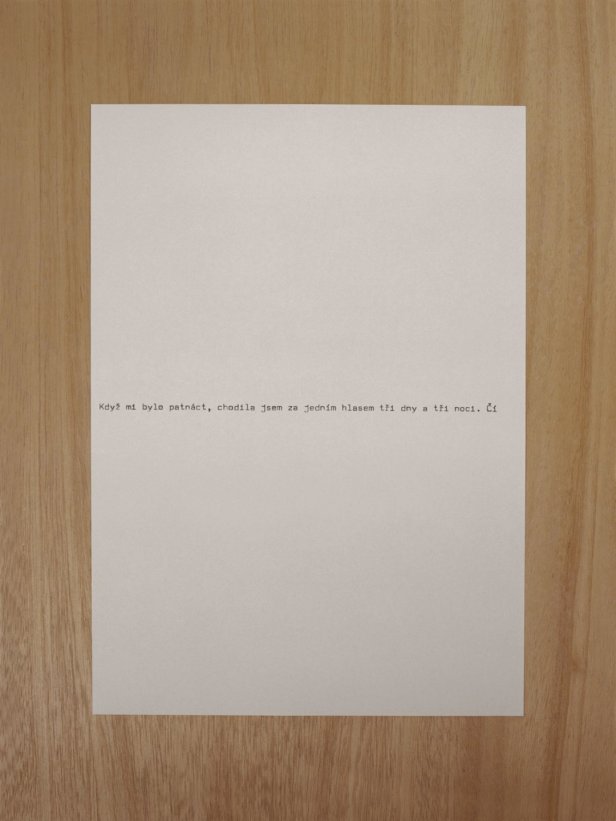 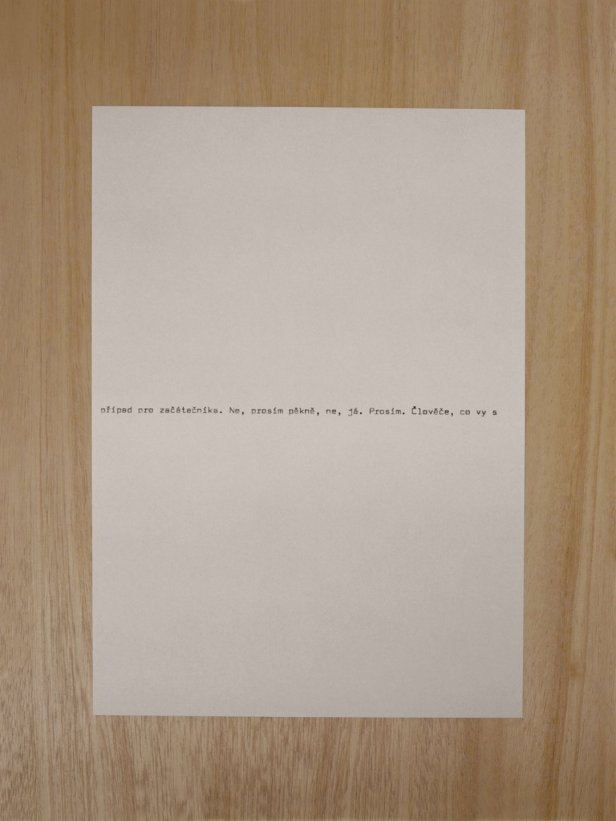