Veronika Bromová’s new self-portraits move her characteristic “self-performances” captured on camera to positions indicative of the current day: selfies and in-the-moment shots. Her latest work builds on portraits and self-portraits emphasizing the reversed positions of those photographed and attempts to understand their psychological dynamic. We see a similar principle in the series of manipulated nudes reacting to the complexity of family influence and its dark side.

Veronika Bromová was shaped by the climate of the late 1980s / early 1990s. She always admits being heavily influenced by her parents. As concerns poetics, it was mainly about the magicalness and imaginativeness tied to the visual trends of the contemporary world. On a formal level, it concerned the principle of repetition, fragmentation, layering, montage and collage. Dagmar and Pavel Brom carried the photographic medium over to the print format in the genealogical intention of xylography as was once used in reproductions primarily from the 18th and 19thcenturies. They applied similar techniques to contemporary pop culture images in a refined way. Their preparatory graphic designs, clippings and final illustrations demonstrate a noteworthy kinship to the works of Veronika Bromová, who in the spirit of the family tradition works with the language of photography and its derivatives.

The Broms were influencing the visual style of Czech graphic design from the 1960s and 1970s. In addition to illustrations, they collaborated on accompanying graphic materials for theatrical stage design and for music publishers. Veronika Bromová was one of the key figures in the 1990s new media genre; namely, photographic post-production and the digitally-manipulated image. She made use of the technical options afforded by the end of the millennium, and did so in an innovative way, just like her parents in their day: they too achieved noteworthy results in their chosen medium of photomontage.

The Broms worked together closely, in tandem. Veronika also took part since her childhood in cropping individual fragments, pasting them and then adding on sketches by hand. She joined in the process of creating individual designs and implementing them. The resulting collages use fragments from the artists’ extensive archive, from intentionally-taken photographs of family members and clippings from historical and period magazines. They draw on the mundaneness, symbols of European mythology, of non-European cultures and on contemporary trends in graphic design and mass media. With this vast scope, they strongly disrupt the limitations of culture in the East Bloc. This is evident primarily in the independent collages of Dagmar Bromová that courageously antagonize the individual and conventional idea of womanhood and polarize the more general attributes of free identity, emancipated femininity, motherhood and societal repression (for example, covers from Revue Fotografie).

Josef Kroutvor writes these lines about the “constant flow of imagination and almost incessant montage of details”: “The style of their illustrations in The Three Musketeers, in Jules Verne novels, in reports for Mladý svět magazine or for theater posters became part of our subconscious long ago. Pavel Brom, known for using large, several-meters-wide posters whose surfaces are filled with thousands of details, documents our age full of events, information, facts…”1 Kroutvor’s following lines on Pavel Brom could be applied just as well to the characteristic early works by Veronika Bromová: “Brom’s mystification does not deform. It forcefully casts doubt on the world in question by doubling, repeating and multiplying the scopes or ranges of our ideas about how the world is organized. The visible, and almost tangible, specificity of the photographic fact that Brom prizes above all else is always preserved, but the structure of seeing changes. (…) Each of Brom’s poetic paradoxes is the result of a carefully-made choice during the experimental process of montage and photomontage.”2

Machinations of photographic and graphic fragments in the collage compositions gained unity in the Broms’ imaging. The xylograph technology enabled them almost to erase the seams from the collages and work with the illusiveness of organically functioning phenomena. “With a growing number of elements grows the number of problems: exponentially,” says Pavel Brom about the endless number of connections between fragments in graphic designs.3 In their own style of photo-surgery manipulations (using “photo-implants” and “photo-amputation”), the Broms, and in many cases, Veronika Bromová in the 1990s, build on the experimental processes of montage and photomontage.4 The Broms were able to interest both the expert and lay publics. In the same way, Veronika communicates quickly an understandably articulated visuality; however, her writing is both limited and free. Like her parents, she too appropriates existing images. She moves from genre to genre and tends toward romanticizing positions. Veronika, with her own approach to the medium of manipulated photographs, distinguishes herself from her parents’ obsession with details: “But my parents put together a number of photographic details. I, on the contrary, tend to work with this mass analytically. I select one thing and work with it. Often, this is some material that I find and which then inspires me; it leads me to create certain photographs. Sometimes, it’s the opposite.”5

Magicalness and fantasticality, or even “an undefinable presence of miraculous events”6 characterize the basic attributes of the family tradition that Veronika Bromová freely develops in her own creative work. He father says of the topic “magic” in a media photomontage in a period interview: “This is a certain type of production secret, but mainly it wouldn’t be very interesting otherwise. In brief: we make use of the benefits of all modern, optical-visual resources that we know today. Including television or the Laterna magika.”7

An obsession with drawing, uncommon – even ostentatious – perfectionism and the crypticness of symbols enable us to provide a view of the difficult time that was the 1960s and 1970s. The post-war period, namely the normalization period that forced upon people, and constructed, polarized positions and roles, dictated conformism on one hand, and a resistant subversion or escape from reality on the other. The Broms illustrated typical genres that the regime considered non-conflictual: emblematic titles from adventure books, learning publications that popularized history and science. The murky, complex description of the Broms’ situation does not simplify in any way our clear reading of period reality or their values. Quite to the contrary, the engulfment in details offers a vision of non-transparent, re-combined relationships. It explains nothing, and sometimes it forces in a complicated way an idea of hidden interests and calls on viewers to interpret further unexpected ties and connections.

Free imagination’s strength and power in the confines of applied creations, mainly illustrations, corresponded to the limitations on free life in society: in a period of censorship, ideologies and dogmas this had much greater importance. Imaginative collages from the Broms’ photomontages are characterized by a jumble of details pulled from various cultural and historical contexts. The relationships between individual fragments are unclear; they are bound by necessity. Sometimes the figures are as if drowned in the environments that govern them.

Good and evil meet before a backdrop of higher interests; politics becomes metaphysics. The figures are oftentimes swallowed up by their environments; their roles and positions complicate relationships. We see clearly in the illustrations for The Three Musketeers how varied vested interests, intrigues and period conventions take over individual figures. In Verne’s works, on the contrary, the Broms’ illustrations interpret his exploratory mission and adventures as a bumbling leap into an unknown reality. History is bigger than people, and man is small when confronted with the principles of nature.

Dagmar Bromová (21 Nov. 1939 – 13 Nov. 2008) studied at the SPŠG (Industrial Graphics High School) Hellichova. She later worked at SEVT printers and graduated fromAcademy of Fine Arts, Prague, studying under professor Karel Souček.
Pavel Brom (8 May 1938 – 4 June 2009) taught himself lithography; he graduated from Academy of Fine Arts, Prague, studying under professors Vladimír Silovský and Antonín Pelc.
Dagmar and Pavel Brom worked together as a team for Mladá fronta and other publishing houses: for Mladý svět and for other magazines. They created visual styles for the following theaters: Divadlo za Branou, Divadlo Jiřího Wolkera (Jiří Wolker Theater) and for German theaters for Otomar Krejča. They also designed many album covers, i.e. for Jiří Šlitr, Pavel Novák, etc. The books for which they did graphic design include, for example, the popular The Three Musketeers (1968), Verne’s Two Years’ Vacation and A Captain at Fifteen (1969), and titles such as Toulky českou minulostí (Walks through the Czech Past) by Karel Pacner as well as his … a velký skok pro lidstvo (A Giant Leap for Mankind) (1970-71), et al.

For their lending of works from the collection fund, we thank the following: Museum of Decorative Arts in Prague, Iva Knoblochová, Lucie Kölbersbergerová, Ondřej Kocourek (photo), Jiří Homola (reproduction),

Fot their technical support, we thank the following: Moravian Gallery in Brno and Prague City Gallery 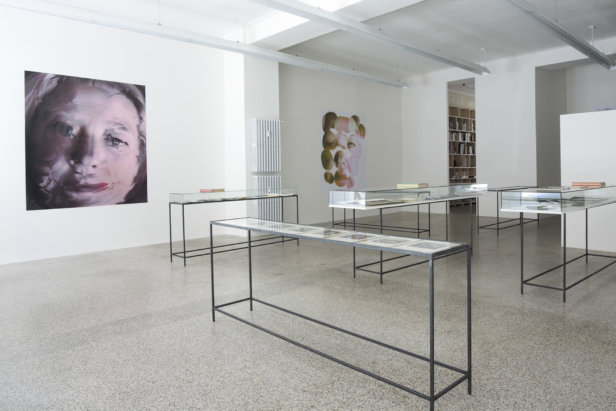 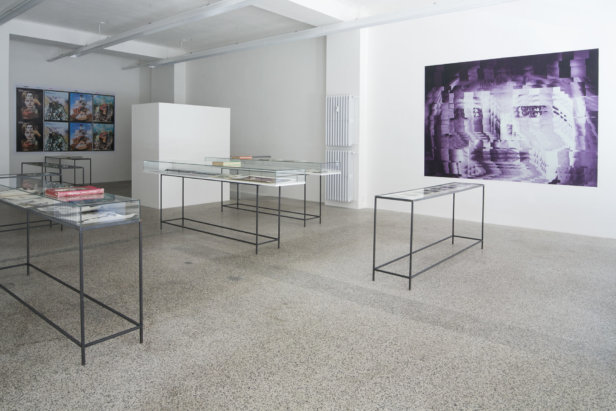 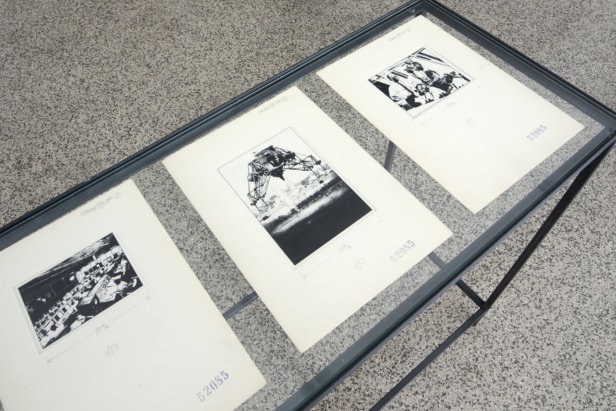 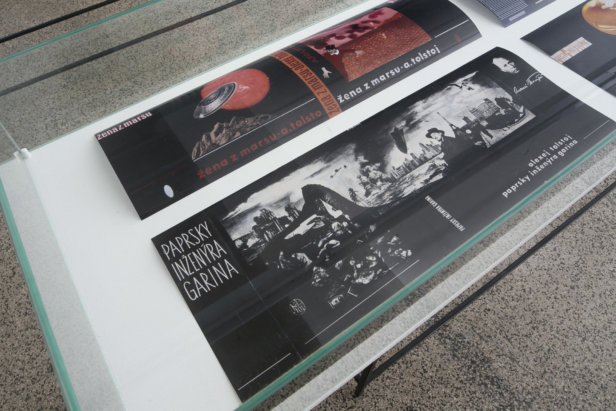 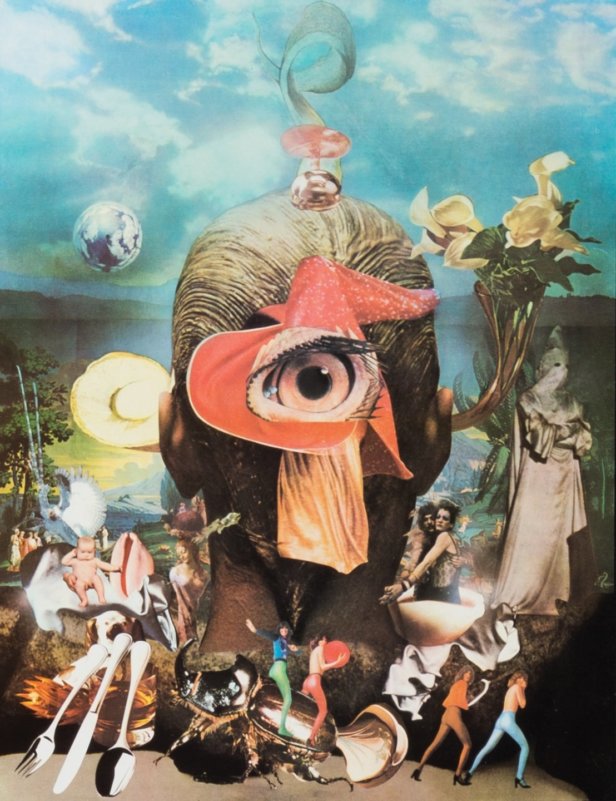 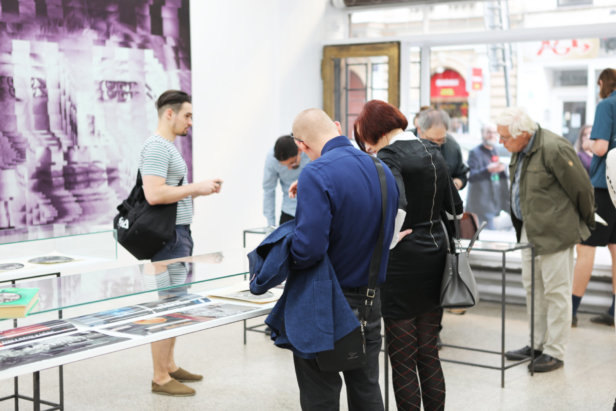 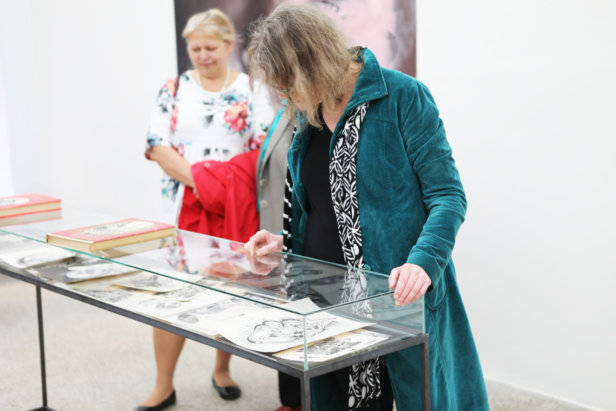 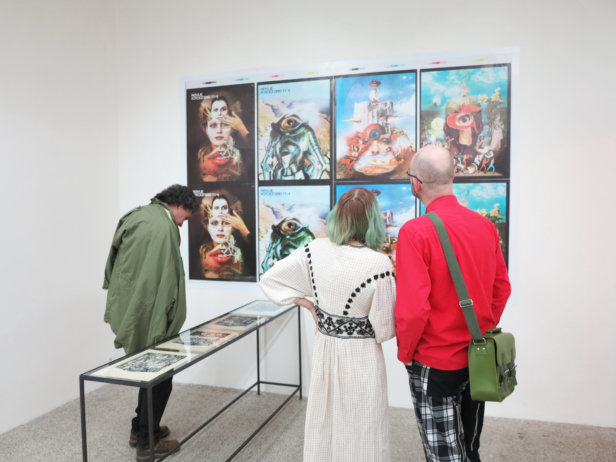 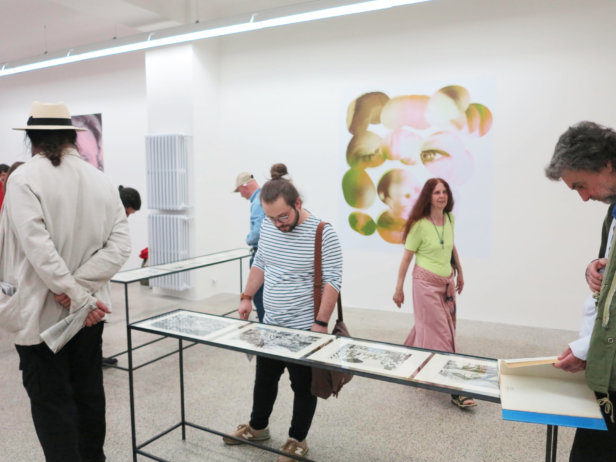 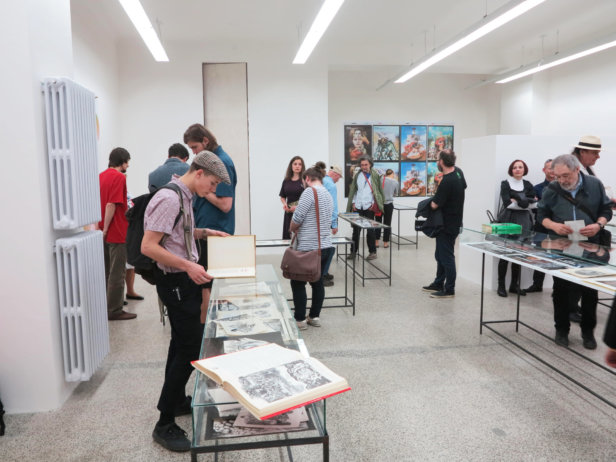 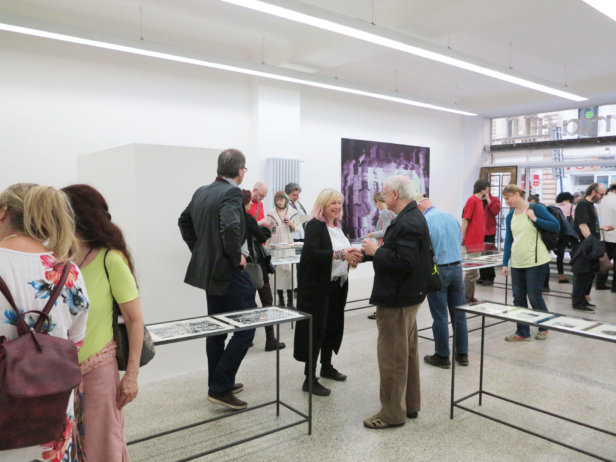 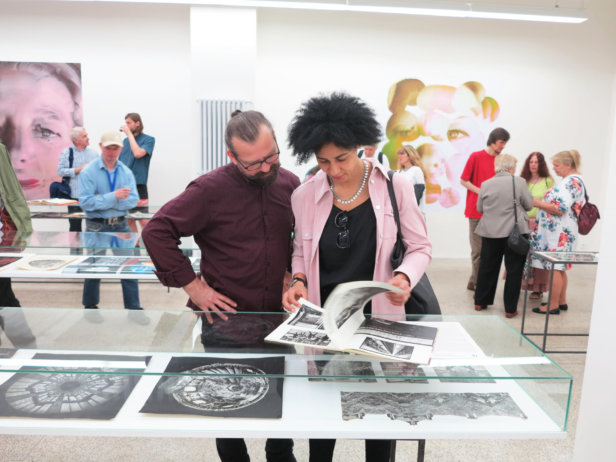 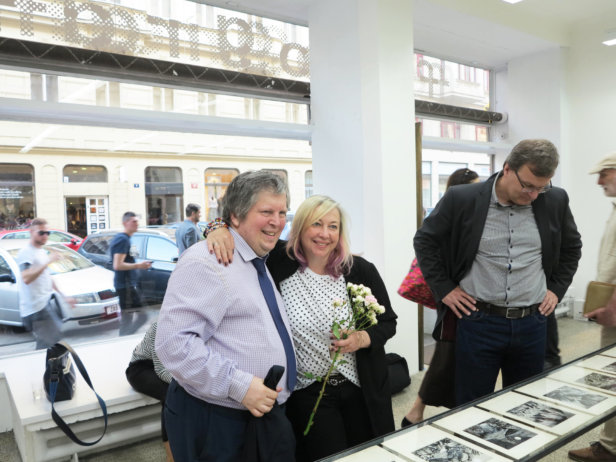 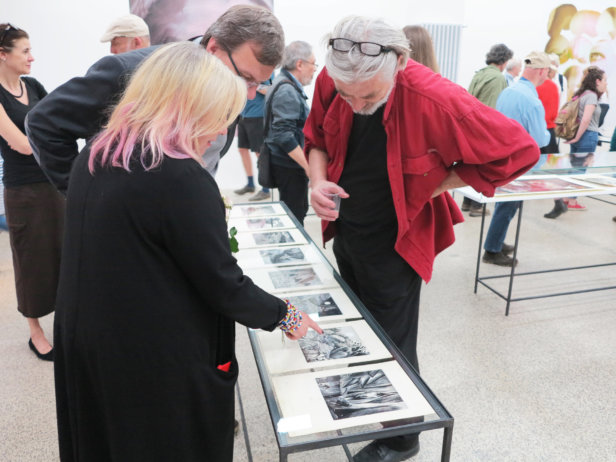 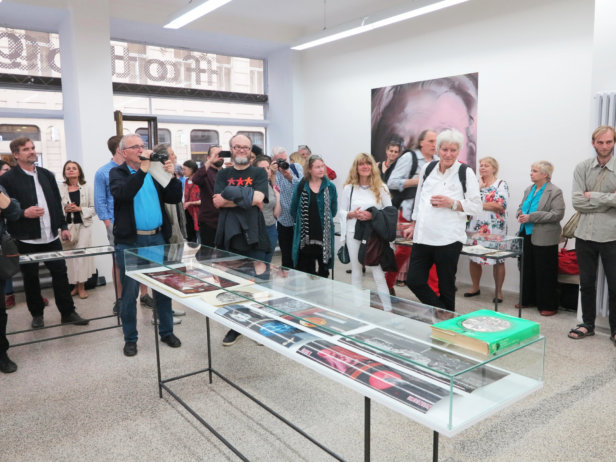 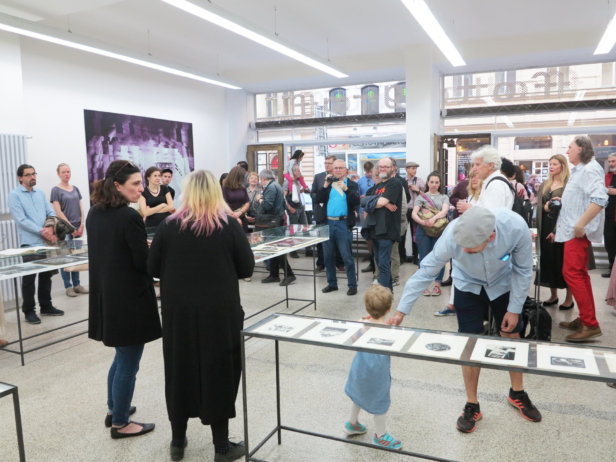 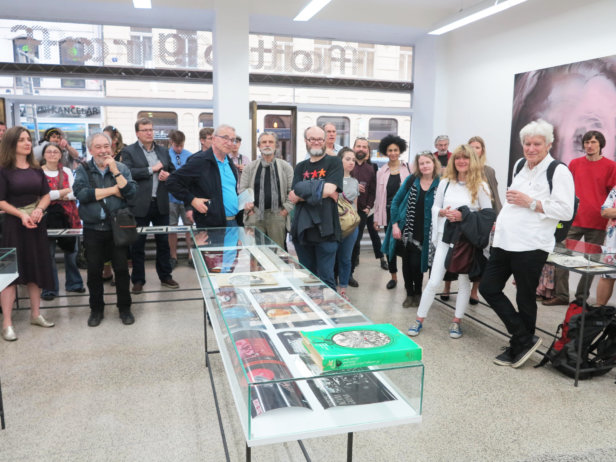 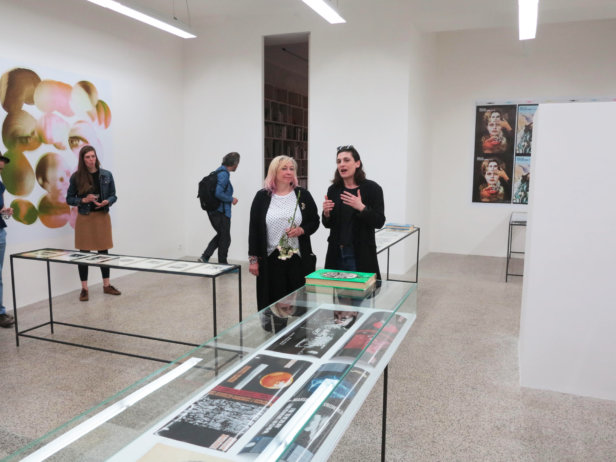 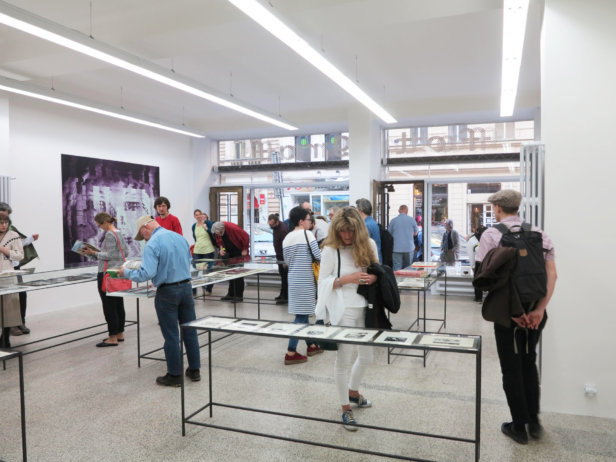 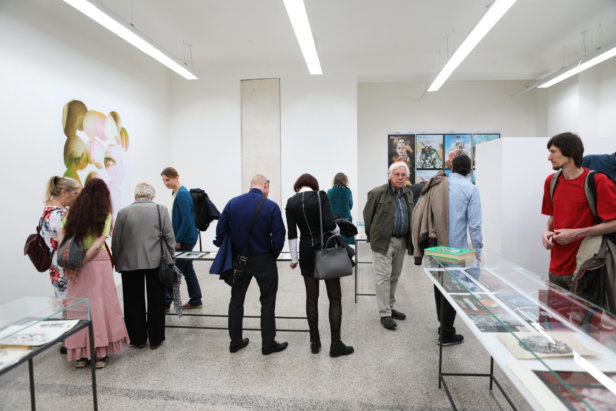