Radek Brousil (*1980) photographed the equipment in his own studio and in this manner drew attention to the objects that shaped his work, but which had not yet been visible.

He preferred the work’s more subjective position, where he „communicated“ with the models and looked for a way to display them and how to emphasize them, to the classic method of evidence that might have been more familiar to him given that he adheres to the trend of conceptual photography. He arranged the objects in a still-life, photographing both details and wholes. He paid careful attention to his choice of background, colour harmony and contrasts, textures and reflections. He placed the aesthetic point of view above, for example, the study of the functions of photographic equipment and their roles in photographic work. He underscored the significance of his own initiative.

The complete Studio Works collection consists of almost 20 photos. Last year Brousil exhibited the majority of them in Bratislava’s OPEN Gallery (curator: Michal Stolárik). He included the others (together with one „studio“ installation) in the currently running joint exhibition with Jan Pfeiffer, Constructive Works, at Brno’s Kabinet Gallery. There were several others that he did not show this time at the Fotograf Gallery. If we look at his photos carefully and think about their relationship to the name of the collection, which when translated into Czech could mean both „works created in a studio“ as well as „work in a studio“, we realise that their central theme is surprisingly not things from a studio, but rather the photographer’s creative use of the tools, i.e. „the photographer himself at work.“

Brousil does not perceive this work only as the mechanics of photography, but also as an inventive solution in which judgment/opinion and taste play a role. The way that Brousil reflects his work environment reveals much about his own aesthetic points of view and his creative approaches.

This is his internal conversation with things; taking place in the solace of his own workshop. It is an interview similar to a game of chess that he plays against himself. Through photos of his own work utensils, he created a portrait of a second player, but at the same time also his self-portrait. In this way, it makes sense that he did not photograph his own person or his closest ally – the camera. He created his self/portrait of the „photographer at work“ by showing his surroundings and leaving the centre empty.

He characteristically works with distinctive visual reduction and plays with wiping off the borders of formal results of photography, spatial object and installation. As resulting from the name of the exhibition, the main theme is the work in a studio. In this particular case, the author voluntarily abandons exterior and concentrates on the intimate and individual work in free space that represents something like second home for many artists. An important quality of this autonomous milieu is freedom and creativity that Brousil fully works with. This fact is proved by a series of photographies – tribute to photographic tools and basic instruments of his studio. The immediate example of this is a glorification of the tripod and its subsequently aestheticizing and displaying in a different context. Brousil transfers tripods from their functional background and concentrates the main attention on them (tripod on a table as the pedestal). He creates diverse space variations and accents their aesthetic quality and, at the same time, draws the attention on their important function. He reproduces compositions in which he fixes the tripod on some other functional objects, so he changes them into aesthetically perfect forms. Radek Brousil as well underlines its dual utilization by using visually attractive multi-exposition for recording kinetically moving tripod – he also denies its primal function (stability) with this. But the capturing of this movement would be impossible without the presence of other tripod. The effort of static expression of movement and time is important also in a photography diptych; in its first composition pictures two tripods carrying a blue round object and in the second one we can see a shift that reveals the procedure of its production. Radek Brousil is primarily a photographer but he also tries to disturb stereotype by his work and to put a viewer into different sensual uncertainties. An important example from this cycle is a monumental photography, respectively a photographical object, in which we can see a curtain from a residential apartment in Brussels. Only the picturing itself with its natural plasticity evokes the effect of volume. The author supports it even more with the space installation and draws the attention on the effort to disturb a classically hanging painting. Installation of the exposition represents an imaginary play with room that is defined by a moderately modified gallery disposition. After the first contact with the curtain photography, the viewer comes to the finale of the exposition where he can see the spatial installation. Brousil, similarly as his other works, accents the function of the tripod that the author uses for attaching of background but, first of all, uncovers the process of creation of the already-seen “curtain”. He aestheticizes a before neutral milieu and puts it in the centre of our attention and also promotes a working instrument to an art object. He replaces a classically white background with a large-sized photography that closes the imaginary circle of the entire exhibition. Brousil uses picturing of a picture in the picture that also has its own historical connotation. Despite the fact, that the exposition represents a lot of formally and compositionally perfect photographies, it is impossible to forget freedom and creativity that is a part of the entire process of photography. 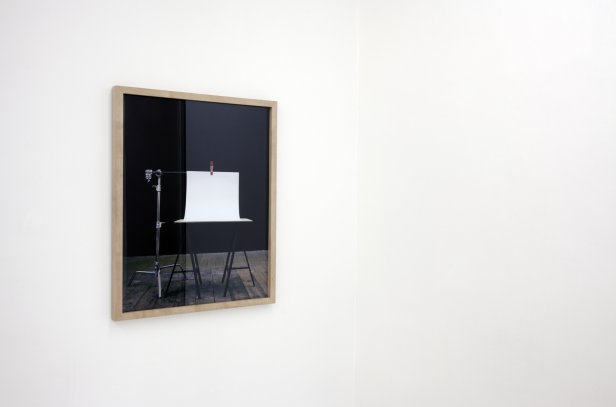 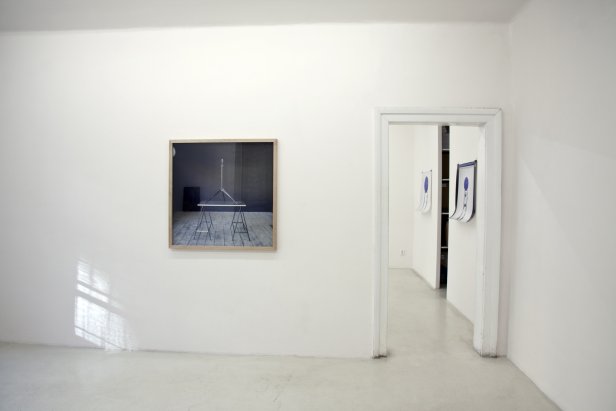 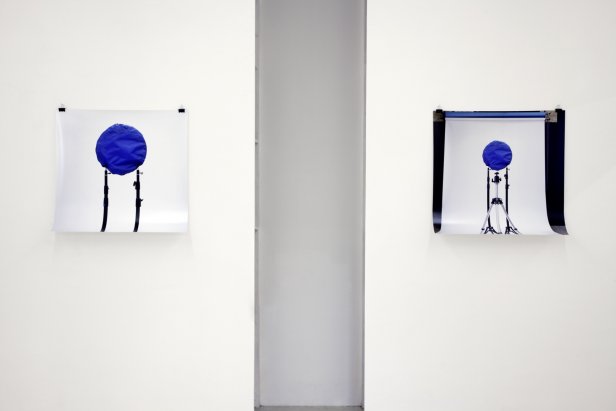 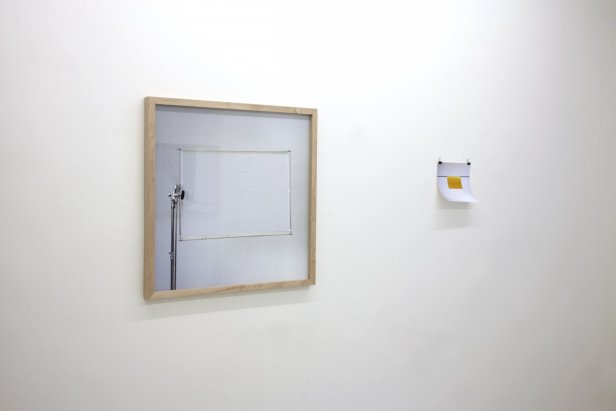 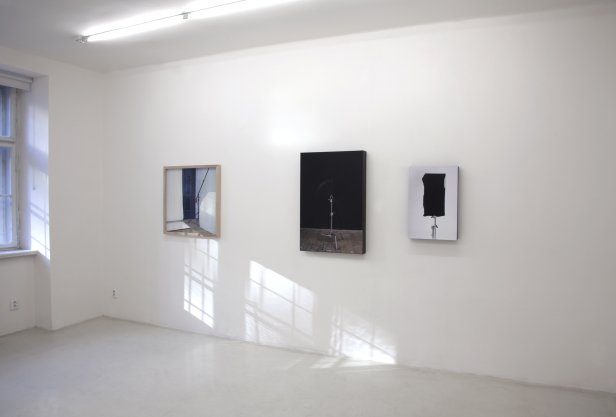 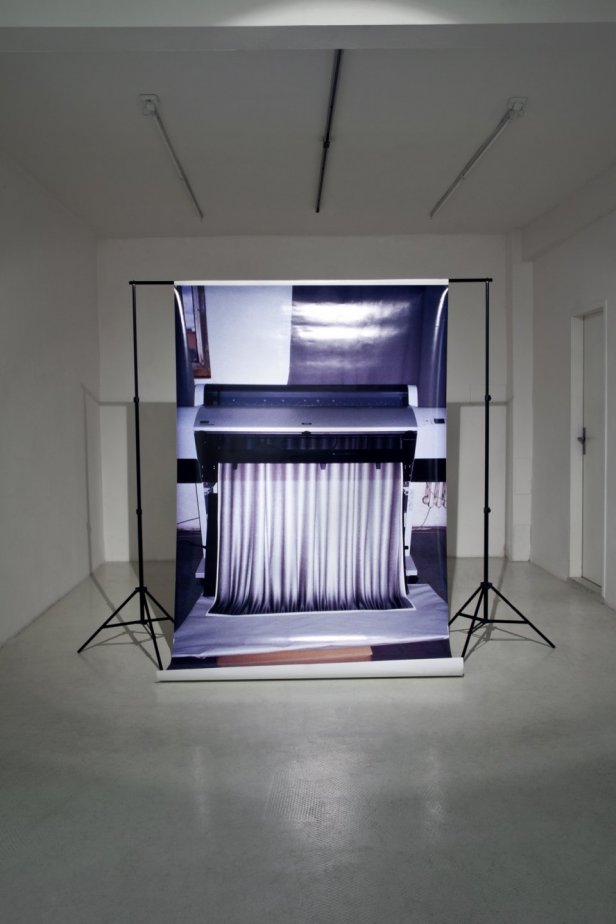 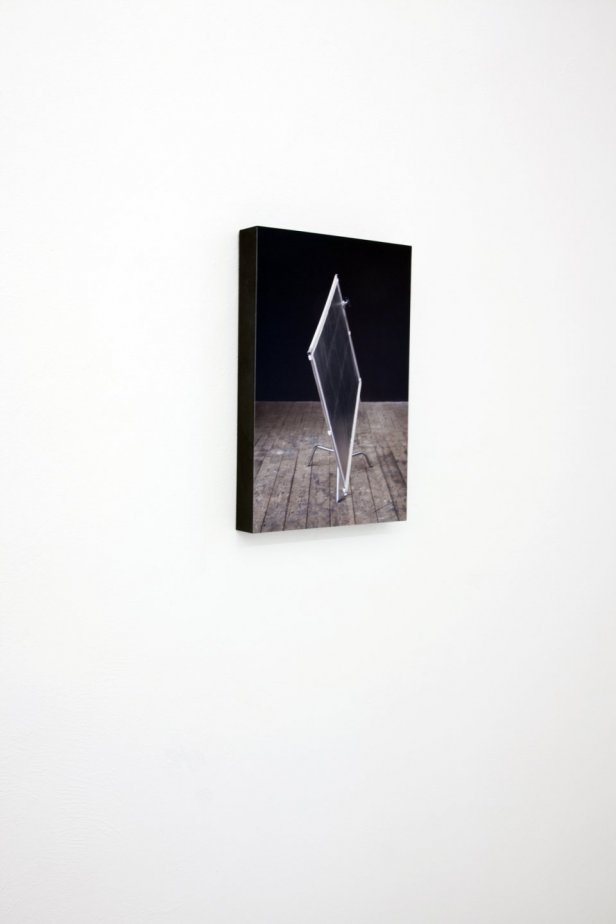 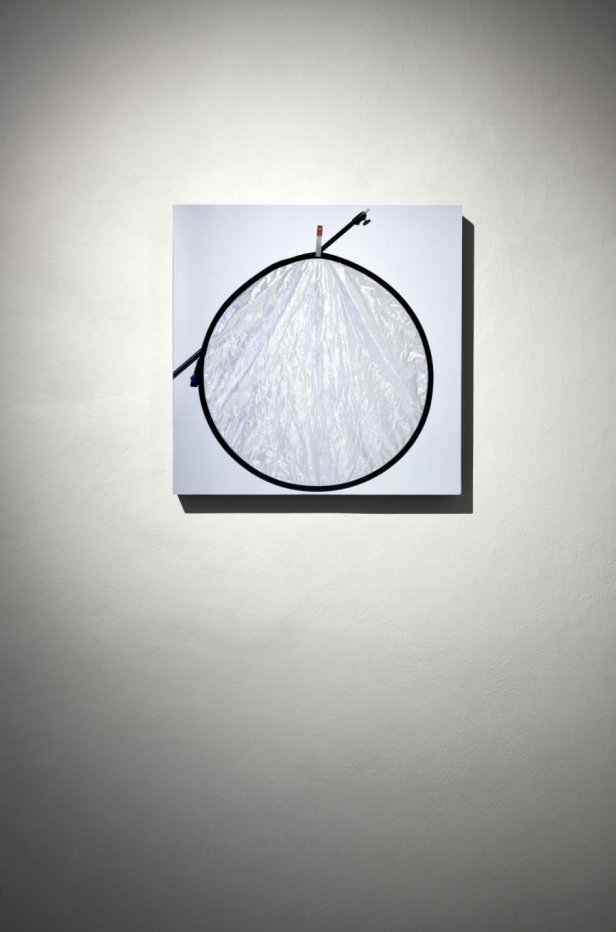 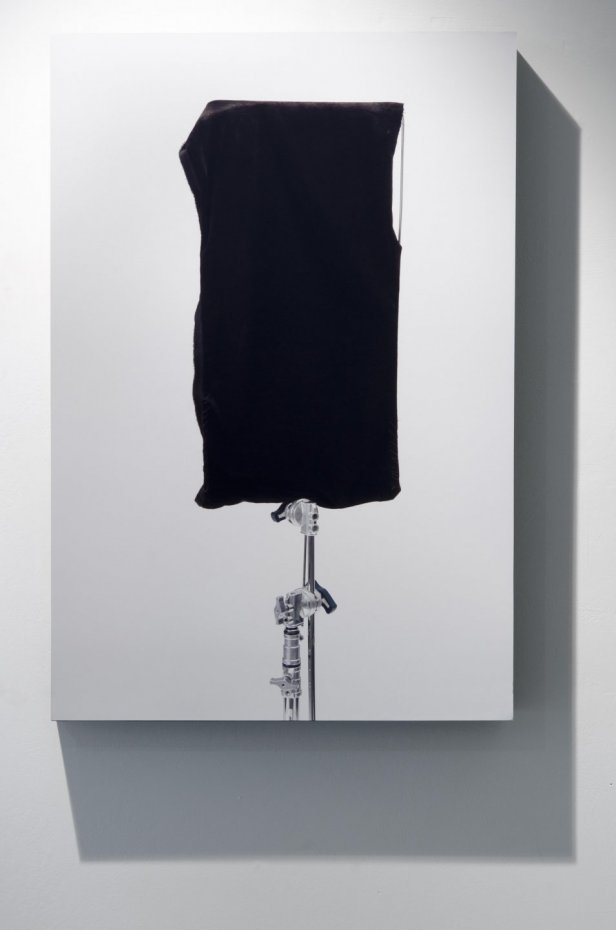 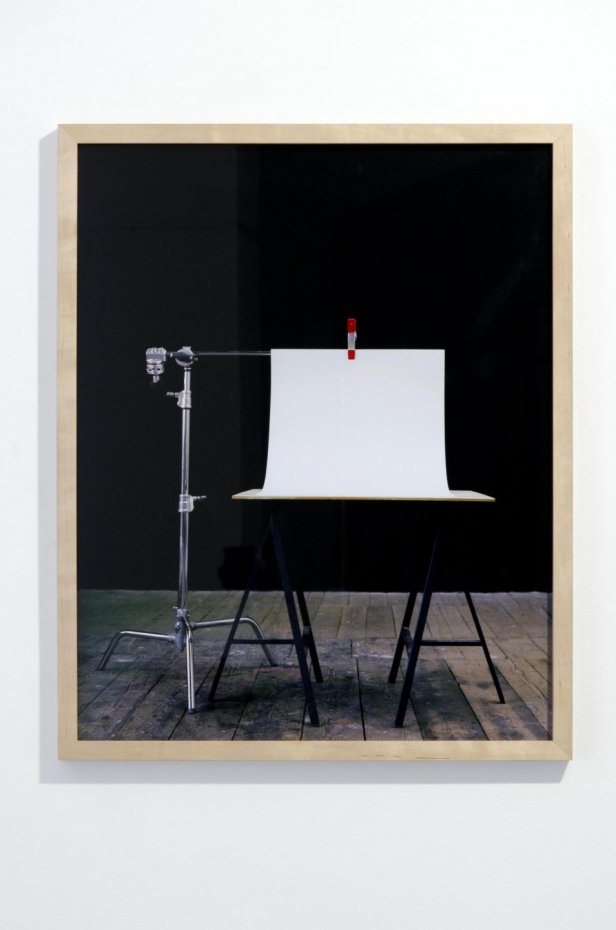 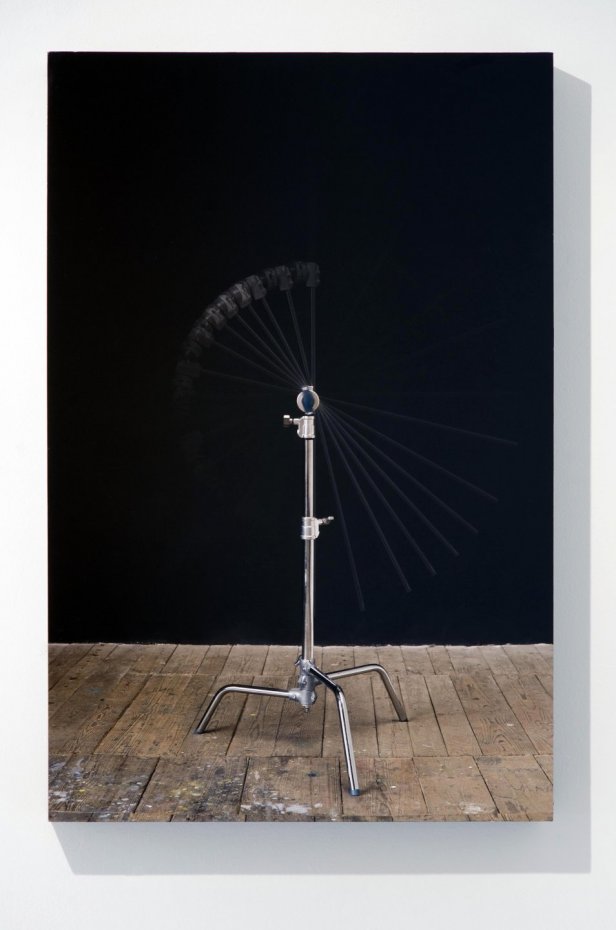 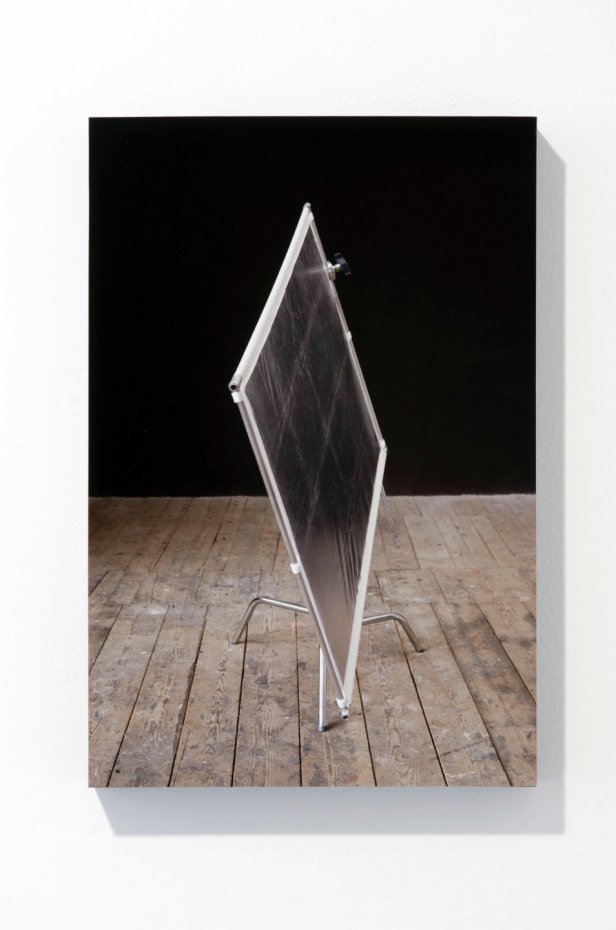