Anna Balážová
— Something in the Image

“Despite the fact that the work is entitled Something in the Image, it strives to draw attention to something that is actually outside of it, exterior to the image,” writes Anna Balážová about her audio-visual presentation. Let us try to envision it as the film version of the first pilots attempting to lift off from the earth’s surface, that heroic hopping about – which today appears unjustifiably comical in the contemporary film records, but continues to point to the specific boundary where a jump is transformed into flight. As a child, I liked to jump into the distance for the same reason, for that brief feeling of convincing release.

Something in the Image is a compilation of short sequences of images and sounds projected in parallel. Anna Balážová, a young artist from Brno (she was born in 1987), allows the images to draw near to the sounds, to merge with them, or, conversely, she chooses an approach of distance, underlining how unrelated they are to each other.
Shots of details of reality, fragments of animation and environments (landscapes) created in a studio, snippets of a whispered conversation – something of a practical discussion regarding the technical filming conditions, the clatter of hard soles on the floor, and unidentifiable sound effects are confidently combined by the artist into their common associative effect. The ambiguity of hierarchies and links is a flight over a field of mutual gravitational pulls and how they are overcome, between what we see and what we hear, between that which we perceive and that which we imagine. What is there has a power comparable to that which we know is not there. Balážová achieves impressiveness in her work using a minimum of resources, and, despite the ungraspable nature of the whole (there is no centre, no fixed point, no outcome), creates a poetic visual essay about the subtle network existing between the portrayed and the act of portraying, and about the role the human mind plays in the process of portrayal and reception.

The majority of the shots presented in Something in the Image originated during the making of the animated film Půda, pevná je (How Firm the Soil), which Balážová has been working on with Katarínou Hládeková since last year. In it, the story will flow uninterruptedly, one image following another in a causal chain, and everything behind the camera will be displaced. Much like the installations, photographs, and objects in which Balážová and Hládeková transpose their experience with building an animated film environment into autonomous gallery artefacts, Balážová’s Something in the Image is her original transformation of the in-progress and waste material from Půda, pevná je (How Firm the Soil) into a distinctive audio-visual work, whose imaginative imagery is interlaced with fragmentary references to the work process, to filmmaking and animation methods. In a certain sense, it is the preliminary capsizing (inversion) of the rules defined for an as yet non-existing work.

The presentation in the Fotograf Gallery is the second of two summer exhibitions presenting important representatives of the young generation from Brno, who, in addition, mutually support each other and collaborate together.  Coincidentally, two other individuals to whom they are close – the animator and graphic artist Jan Šrámek and the illustrator Veronika Vlková – held an exhibition in the nearby Školská 28 Communication Space in July, and thus the Moravian annexation of one Prague gallery can be considered to be absolute. 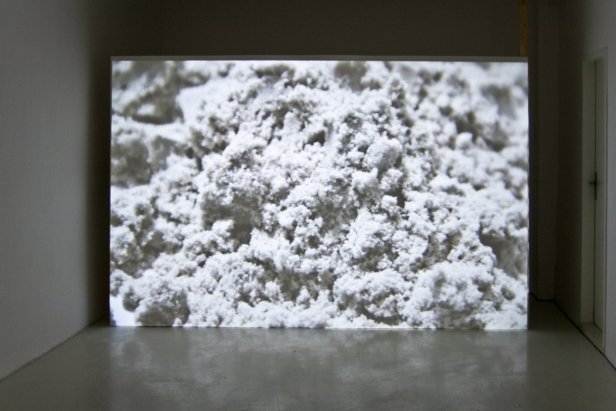